I’m Andy Gipson, and I am so honored to be your Mississippi Commissioner of Agriculture and Commerce.  Serving the people of our wonderful State has been a highlight of my life, fighting and winning in the Legislature for our rural family values and conservative principles.  Now I am employing those same skills to fight every day for our Mississippi farmers, ranchers and landowners.

A lifelong Mississippian, I was born, raised and educated right here in Mississippi, making a life in our Magnolia State.  As a boy growing up in rural Rankin County, I worked on weekends and after school on our family’s small farm in Simpson County, cutting pulpwood and clearing pasture.  As a teenager I had a dream to grow my own cow/calf operation from scratch on our family farm, which I was blessed to accomplish.  After graduating from Brandon High School I moved to the farm where I built a 300 square foot cabin at age 18.  From that cabin I began my college education at Mississippi College in Clinton, making the hour commute from Braxton every day so I could continue to live on the farm.

I met the girl I knew would be my future wife, Leslie, in the hallway of Provine Chapel at M.C.  After I graduated with the equivalent of a double major in Christian Studies and Political Science, I earned a scholarship to Mississippi College School of Law, all the while living on the farm.  Leslie and I “courted” for a year, we were engaged for a year, and we were married on July 28, 2001.  Over seventeen years later Leslie is still the love of my life and we are blessed with four children, Joseph, Benjamin, Abigail and Sarah.

When I started working and making a living for my family in private law practice, I also became a member of the American Agricultural Law Association.  In those days, Leslie and I made the intentional decision to raise our family on the farm and we’ve been blessed to be able to do that all these years.  In 2004 we were able to purchase our own farm, and today we still live on the farm raising timber, cattle, chickens, and blueberries.  Sometimes we have honey bees. 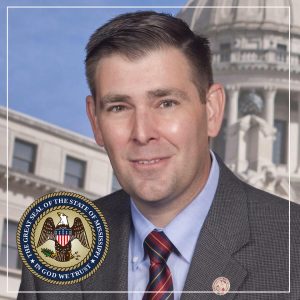 I was elected to the Mississippi Legislature in 2007, sent there by the good people of Simpson, Rankin and Smith Counties to serve as the Republican State Representative for District 77.  In the Legislature I was able to lead on key issues important to our rural way of life.

Since 2012 I served as Chairman of the House Judiciary B Committee where we passed many bills beneficial to Mississippi agriculture.  I killed many more bills that would have harmed Mississippi farmers.  In 2013 I received the NRA’s Defender of Freedom Award for my legislative work leading the fight for our Second Amendment. That same year I received the Kirk Fordice Freedom award from our local Friends of NRA.  I received the Pro-Life Legislator of the Year Award in 2014.  In 2017 I led the floor passage of the Mississippi “Back the Badge” Act to protect our law enforcement officers.

In 2016 I was named Chairman of the House Ethics Committee, becoming the first member of the Legislature to hold two chairmanships at the same time.  That same year I was named one of the “Top 50” most influential people in Mississippi in the category of elected/appointed officials by MS Top 50.

At age 34 I surrendered to God’s call on my life to preach the Gospel.  An ordained Southern Baptist minister, I have served as an evangelist, interim pastor and pastor of a small rural congregation. I find my greatest joy in preaching the Good News, proclaiming the forgiveness and eternal hope found in Jesus Christ. 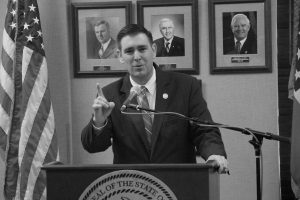 "Thank you for allowing me to serve as your Mississippi Commissioner of Agriculture and Commerce.  I promise to use all my skills – agricultural, business, legislative, speaking and legal skills -  to fight for you and for Mississippi’s farmers, ranchers and landowners."